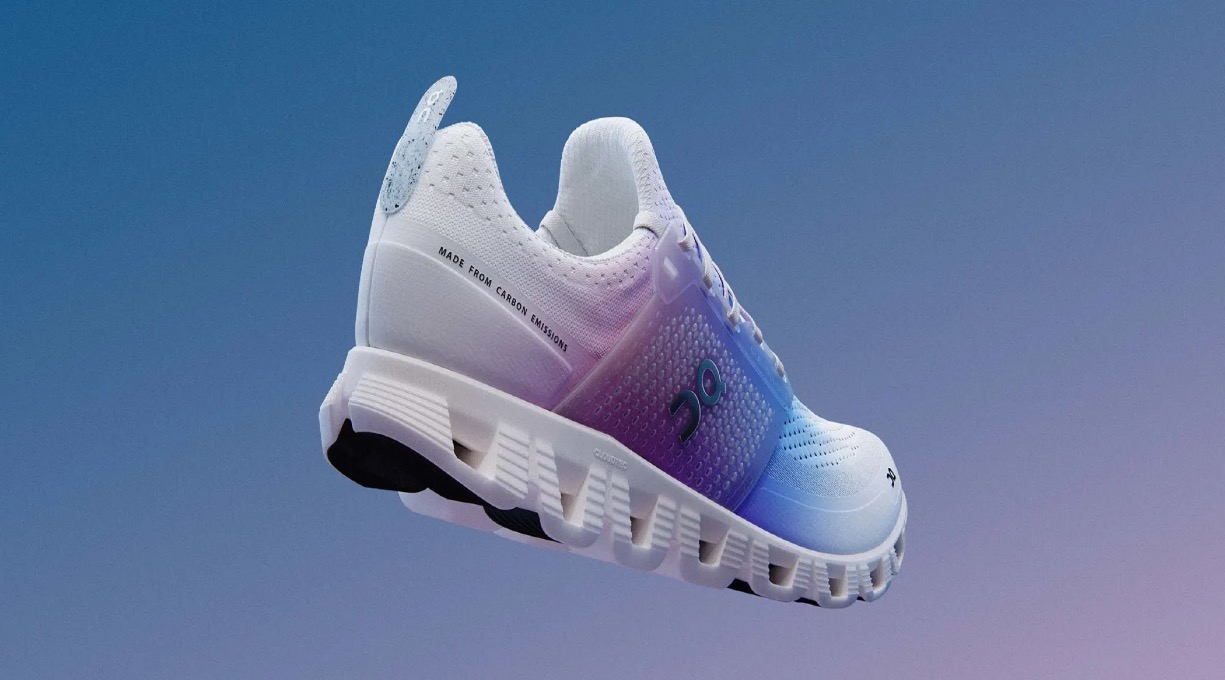 The Swiss sports brand, On is moving the needle in material innovation with the unveiling of its first sports shoe made from carbon emissions. You read that correctly. The brand has created a supply chain coalition with LanzaTech, Borealis, and Technip Energies to transform captured carbon into running shoes. Called Cloudprime, the running shoes mark a ‘significant step’ in On’s journey to move away from petroleum-based resources by creating a new foam material called CleanCloud, making it the first company in the footwear industry to explore carbon emissions as a primary raw material. The material – specifically ethylene vinyl acetate (EVA) foam – could also be used in other parts of the show or even other products in the future. “It’s a win-win situation: We are capturing emissions before they pollute our atmosphere and are at the same time moving away from fossil-based materials,” said Caspar Coppetti, On’s co-founder and executive co-chairman. “Holding the first-ever shoe made of carbon emissions in my hands is a huge milestone – not only for On, but for the whole sports industry. Five years ago, this was barely a dream. Imagine what can happen in the future as we unlock the potential of alternative carbon sources with further research and in collaboration with the best partners.” CleanCloud is the result of five years dedication and research and made possible through a supply chain collaboration with LanzaTech, Borealis, and Technip Energies. Ready for a bit of the science? LanzaTech happens to be an expert in synthetic biology, bioinformatics, artificial intelligence, and machine learning. Throw in a bit of engineering, and the team has been able to create a platform that converts waste carbon into new, everyday products that would otherwise come from virgin fossil resources. Sustainable Brands writes that the firm is in the process of partnering with major companies to scale its impacts in carbon capture. In the past year, the team has partnered with Lululemon to develop polyester made from recycled carbon emissions, and Danone to turn captured carbon directly into monoethylene glycol – a key part of polyethylene terephthalate (PET) resin, fibres and bottles. In January this year, LanzaTech’s sustainable fuels technology arm LanzaJet received a $50 million capital infusion from Microsoft’s climate Innovation Fund to help scale and lower costs of sustainable aviation fuel and renewable diesel. LanzaTech’s CEO, Jennifer Holmgren, said: “As we increasingly convert pollution into the products we use in our daily lives, we will reduce the need to extract more carbon from the ground. The partnership between On, Borealis, Technip, and LanzaTech will change how the world thinks about sourcing carbon – enabling us to bend the carbon curve, keep our skies blue, and create a sustainable future for all.” Technip Energies, meanwhile, is a company in charge of dehydrating ethanol into the gas, ethylene, an integral building block in widely used plastics, while Borealis is a provider of advanced, circular and renewable plastic solutions essential in creating EVA foam. A bit more science? You got it. The system begins with LanzaTech who captures carbon monoxide emitted from industrial sources before they are released into the atmosphere. Once captured, they enter a fermentation process using naturally occurring bacteria that converts it into ethanol – very much like beer brewing. Technip steps in to dehydrate this ethanol to create ethylene, which is then polymerized by Borealis to become EVA in a form of solid small plastic pellets – the material used by On as performance foam in its shoes. The science-y stuff continues still because On is now also working with Novoloop – a circular startup – on the CleanCloud outsole by utilising the world’s first chemically upcycled thermoplastic polyurethane (TPU) from post-consumer plastic waste. Finally, for the upper, On is collaborating with the French start-up Fairbrics to create a polyester-based textile made from carbon emissions.