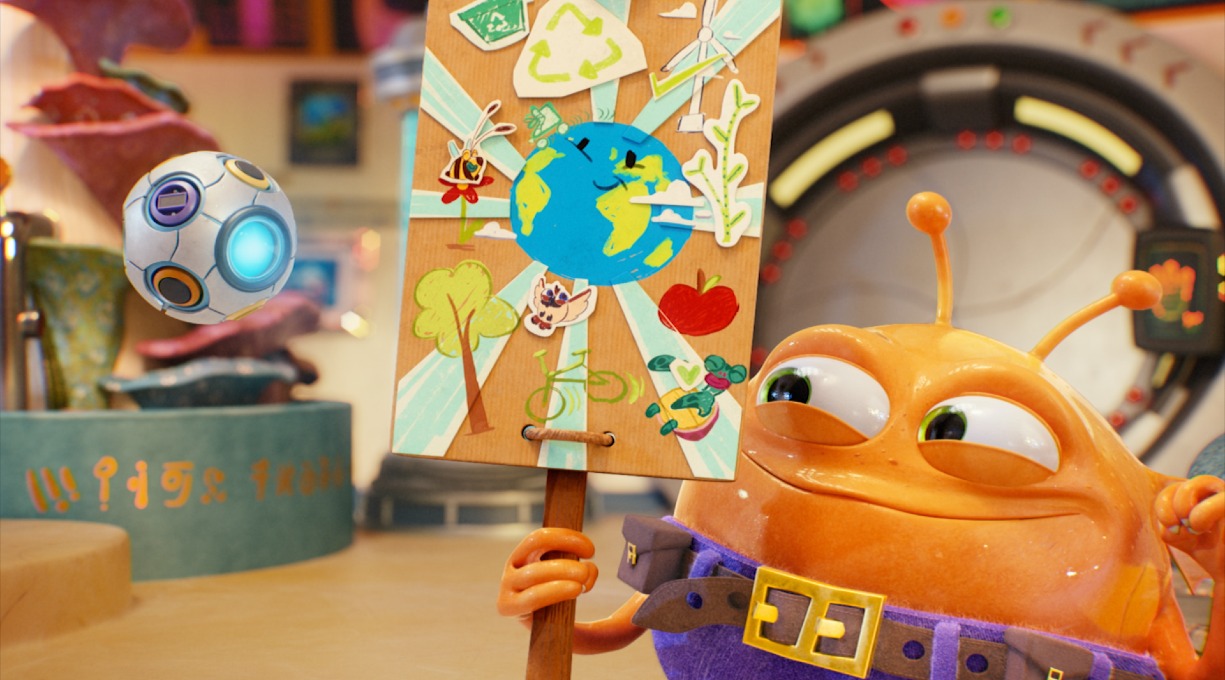 A far cry from British animation’s attempt to spur its school children into environmental action in the late ‘80s, Obki – the new animated series from Obki Productions now broadcast on Sky Kids makes the message abundantly clear; the next generation has to be the most sustainably-minded yet. An evolution of a perhaps lack-lustre attempt to ‘Keep Britain Tidy’ through the short-run animated series Stoppit and Tidyup of yesteryear, Obki’s arrival couldn’t have been a more welcome one. And just as the eyes of the world turn to the UK this November with the launch of COP26 in Glasgow and its hopes of bringing the planet those crucial steps closer to real climate action, we can be thankful that British animation has stepped things up a gear. Created by the former professional sportswoman turned creator and entrepreneur, Amanda Evans, Obki is the chance for a reversal of fortunes. Showcasing life on Earth through the eyes of an alien, this is a series that tackles the topic of the climate crisis by breaking it down into ‘manageable bites’.

“It’s such a scary topic for children,” Obki’s creator, Amanda Evans tells Licensing Source Book. “The way in which it is reported in the media, or the way they might hear adults talking about it. It’s a scary topic for anyone, and especially children. “The idea of Obki is to take on the role of the child in this scenario. Obki is discovering the beauty of the planet, but also that things need to be done to protect it and preserve it and regenerate the environment. The series is a learning process of how he can do that, guided by his robot friend, The Orb, Obki discovers the difference he can make by making small changes, like turning off a tap or recycling a plastic bottle.” It was no accident that Obki found its home on Sky Kids. The new series is in fact a collaborative effort with Sky Zero – the media firm’s campaign to be net zero carbon by 2030 and its commitment to encouraging its customers to #GoZero by using its content to raise awareness. Targeting the children’s market, Obki has since been adopted as Sky’s climate change ambassador and will enjoy a ‘significant presence’ across marketing material when the brand sets itself up at COP26 this month. “That’s so exciting for us, to see Obki take such a presence at COP26 when the world’s attention will be focused on this topic, it really is the epitome of the larger vision for me,” continued Evans. “To have created something that carries this message, now placed on the world stage.” A keen open-water swimmer, Evans struck upon the idea for the series during a trip through Europe and Asia. Thoughts of taking that message into a wider reaching licensing programme were likely the furthest thing from her mind as she swam the six-mile width of the Bosphorus. They’re not so distant now. Licensing is very much the focus of activity now, and it falls on none other than Damian Hopkins, CEO of Radius to be leading that charge. In a move that marks Hopkins’ return to the brand and entertainment space, following an illustrious career within retail, supply chain, and a notable stint within the celebrity lifestyle licensing space, Obki will be the subject of a licensing programme “unlike any other in the children’s sector.” “I believe that Obki represents a new chapter in character licensing that can not only entertain but also educate and enable us all to find solutions to tackle climate change,” Hopkins explains. “The retail industry and supply chains are one of the largest contributors to UK greenhouse gas emissions, accounting for over 30 per cent of all emissions and the retail industry has a goal to reach net zero by 2040. “I believe that Obki is one way that we can educate consumers, retailers, and suppliers to move towards more sustainable merchandise. We will ensure that any licensing partners for Obki engage with us on working towards sustainability both in the products and the practices of their businesses.” Among an enviable list of achievements, Hopkins played an instrumental role in launching Fairtrade Cotton to the UK market. In 2007, he developed an end-to-end Fairtrade accredited supply chain, from African cotton growers, to Indian cotton spinning, to manufacturing in Bangladesh. Within the same year, Hopkins also spearheaded a recycled polyester programme converting school sweatshirts from the likes of BHS and M&S to recycled polyester taken from plastic waste. If there was anyone qualified to take Obki into licensing, then, it’d be him. He continues: “When I met Amanda and heard what she was creating with Obki, and her personal passion for climate change through the creation of a fun kids’ character, I was very excited about what this could mean for character merchandising and the opportunity to create a consumer product range to support Obki that was defined by sustainability.” Evans, adds: “We’ve got the perfect partnership with Damian and Radius and the legacy and credentials that he brings with him in this area, and the perfect home with Sky Kids and its Sky Zero campaign. Bringing all of that to the world’s stage this month at COP26 is the dream turned reality.” Penned by the Products of Change team, this interview first appeared in the latest issue of The Licensing Source Book
CONTENT