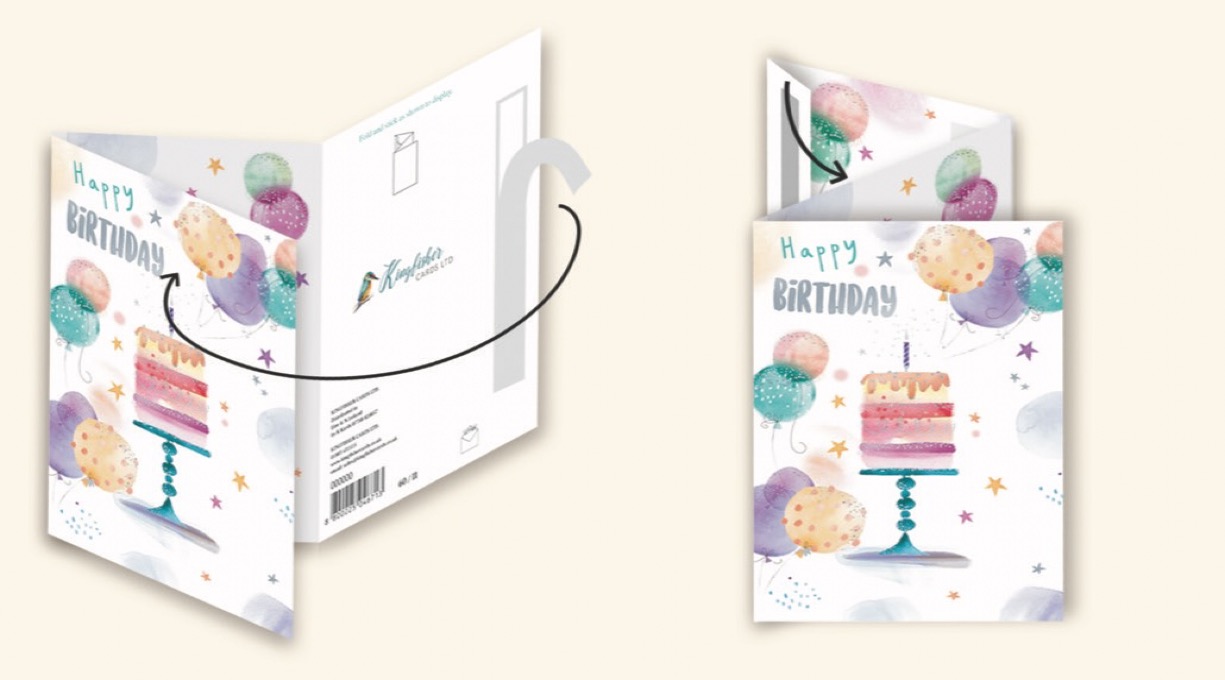 A highlight of this year’s Spring Fair, the envelope-free greetings card range, EnvelopD has finally landed at retailers across the UK, courtesy of a partnership with the much-loved greetings publisher Kingfisher Cards. Developed by the greetings industry’s Derren Seal – a widely-respected sales agent turned industry innovator – the new concept aims to reduce the levels of waste produced by the greetings sector through lost or damaged envelopes. EnvelopD offers a solution to the problem with the provision of a third leaf to a standard single fold card. This third leaf can be folded across the front of the card to form its posting cover and stuck down thanks to its peel-away sticking element that seals the card for addressing and postage.

As the greetings industry takes measures to become more sustainably minded through steps including the removal of cello wrap packaging of cards and the growth in ‘naked cards’ on sale across the country, the issue around waste from envelopes has, too, become a larger topic to tackle. Each card created by different publishers have differing dimensions, requiring a specifically sized envelope to match. “Some envelopes are more appealing than others, and customers sometimes like to choose an alternative envelope from the rack,” Derren tells Products of Change. “Envelopes often become detached from their card resulting in frustrated customers and, ultimately, wasted cards. Now that most retailers have gone cello-free, the issues have increased.” Derren admits that the amount of waste created by lost or damaged envelopes is difficult to measure. It would require auditing across each publisher and retailer in the space, many of whom, suggests Derren, ‘wouldn’t like to admit the full size of the issue.’ “I know the number must be very large, just by my own experience and listening to retailers,” he says. Having started in the Greetings Cards industry in 2010, Derren’s 12-year career to date has given him experience of some of biggest concerns among retailers, and the many concepts trialled within the space to address them. “Publishers have tried various ideas – some have used a sticker to hold the card to the envelope, some a corner clasp (creating more packaging), however, customers invariably remove these to look inside the card and the problem reoccurs. “An environmentally friendly solution was needed which allowed customers to read the insides of the card and to enjoy a bespoke and appealing way to post their card. Rather than thinking ‘Outside the box’, I thought ‘Inside the box’ or rather, the card, to make the envelope element part of the actual card itself.” EnvelopD’s solution enables the design to cover the entire product, giving publishers the additional option to create numerous effects on the suitably-sized third leaf. On receipt of the card, the seal is peeled open – which, Derren adds, leaves no sticky residue behind – and neatly folded and stuck back upon itself. Kingfisher Cards has become the first publisher on board with the concept. Not only did EnvelopD receive investment for development from the company’s managing director, Paul Urban, but Kingfisher Cards are now the first to use the system on a range of everyday cards that were first showcased at the Spring Fair at Birmingham’s NEC in early February. EnvelopD is a UK patent protected design with its international patent application pending. “The goal is to licence it to all publishers in the UK and beyond, thus creating a more environmentally sustainable industry for the future,” says Derren. Early indications for the range are good. Last week saw the initial roll-out of EnvelopD to customers who placed orders with Derren at Spring Fair. “I’ve since had lots of pictures from those customers showing the product on displays either in racks or on the bespoke spinner that we designed highlighting the new concept,” says Derren. “The reception has been good, but I am acutely aware that such a new idea will take time to bed in and hopefully catch the imagination of potential customers. “The idea, I hope, is to see many more (if not all) publishers realise this solution is a winner and produce all their cards this way. Well, you’ve got to think big!”
PAPER GOODS