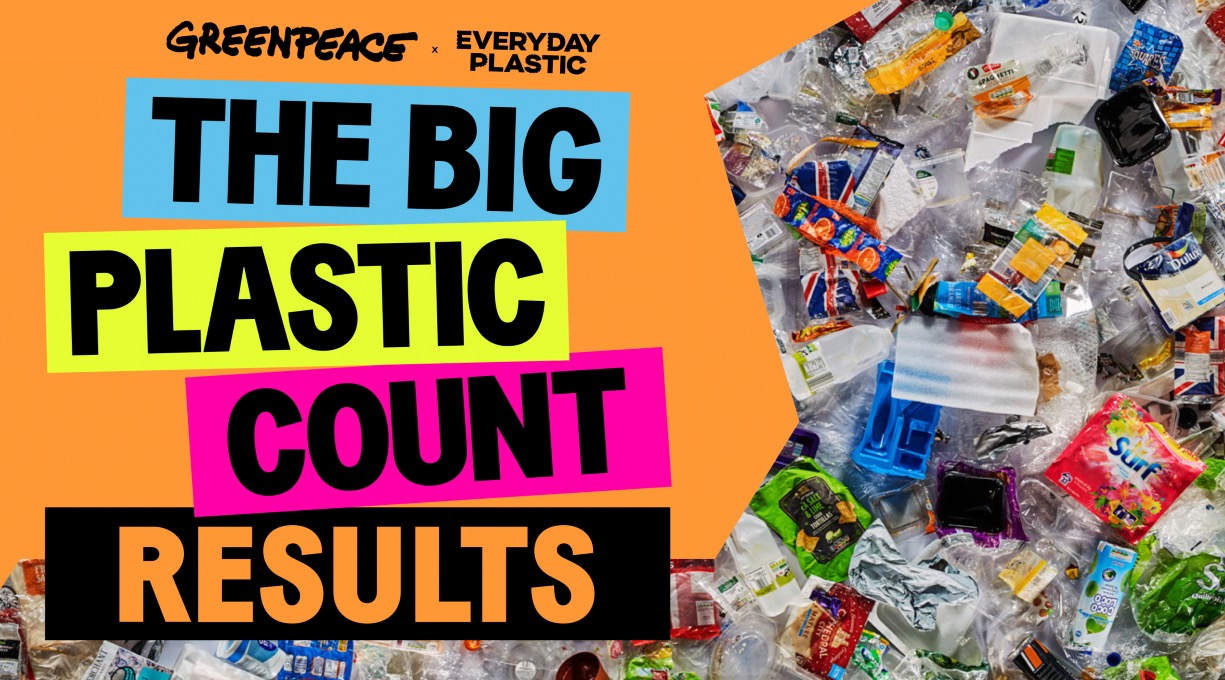 Households in the UK are throwing away nearly 100 billion pieces of plastic each year, according to the results of a nationwide survey carried out Greenpeace earlier this year. The results of The Big Plastic Count, one of the largest voluntary research projects into the scale of plastic waste in the UK indicates that of this number, only 12 per cent is likely to be recycled at reprocessing facilities in the country. More of the UK’s plastic waste (17 per cent) is being shipped overseas than being recycled at home. The global economy currently produces over 350 million tonnes of plastic every year, while researchers warn that chemical pollution threatens the stability of global ecosystems and human health. Recently, traces of microplastics have been found in farm animals, products, and even in human blood. The Guardian writes that while the UK government published data on the weight of plastic waste being collected from households, there are still no official figures about the number of plastic items being thrown away. To address the crisis and get a grasp on the UK’s plastic statistics, Greenpeace and Everyday Plastic launched the investigation in May this year, asking households across the UK to record how much plastic packaging they threw in the bin or recycled, and what type. These results were then submitted to Greenpeace and Everyday Plastic for analysis. Almost 250,000 people from nearly 98,000 households across the UK took part in the count, including 9,427 school students and 36 MPs. “A plastic survey has never been carried out on this scale before, and this incredible piece of citizen science has allowed us to build a unique picture of household plastic habits,” said Daniel Webb, founder and director of Everyday Plastic. “The Big Plastic Count has galvanised the British public to investigate how much they throw away and what happens to their waste, empowering them to gather the crucial evidence presented in this report.” Over the course of the week-long investigation, 6,437,813 pieces of plastic packaging waste was counted with the average UK household throwing away 66 pieces in one week. This amounts to an estimated 3,432 pieces a year. If the totals for count week are assumed to be typical, this indicates that UK households are throwing away an estimated 1.85 billion pieces of plastic a week. That equates to 96.57 billion pieces a year. The most commonly counted items were fruit and vegetable packaging (1.02 million pieces), closely followed by snack bags, packets and wrappers (1.01 million pieces), illustrating, says Greenpeace, how difficult it is for shoppers to avoid packaging when purchasing these products. While 12 per cent of this plastic waste is likely to be recycled here in the UK and 17 per cent shipped elsewhere, almost half the UK’s packaging waste (46 per cent) is likely being incinerated, while the remaining 25 per cent is buried in landfill. 62 per cent of the pieces of plastic recorded in the count are either not collected or poorly collected for recycling by UK local authorities, and likely to end up in landfill or incinerated. Daniel continued: “These new figures lay bare the responsibility of the government, big brands and supermarkets to tackle this crisis, showing just how unavoidable plastic waste is for the UK public and why recycling is only part of the solution.” The UK government announced in 2021 that it will be introducing a set of Extended Producer Responsibility rules that places waste management responsibilities onto producers, incentivising waste reduction at the source. In spring this year, the policy was postponed and amended. Greenpeace and Everyday Plastic are calling on the government to set legally binding targets to almost entirely eliminate single-use plastic, starting with a target of 50 per cent cut in single-use plastic by 2025. They also want a ban on plastic waste exports by 2025, starting with an immediate ban on all exports to non-OECD member countries and mixed plastic waste to OECD member countries. They are also calling for the immediate creation of a deposit return scheme, igniting a move towards better circularity. “Reducing single-use plastic packaging can fight food waste, transform shopping habits and stimulate innovation and new business models,” said Daniel. “The potential benefits are massive.” One business model that promotes the reuse, repair, and refurbish rule in place of the linear economy take, make, and throwaway culture is the Circular Economy. A business model that has been earmarked as the ‘future for a successful and profitable consumer products sector,’ the Circular Economy has become a focus of the Products of Change team’s industry educational efforts. This week, Products of Change will be hosting its first Circular Economy 101 Workshop at the Informa Offices on Blackfriars Road, London. The workshop will be led by Products of Change Advisor and circular economy expert Arthur Parry as he introduces the basic principles of circularity and the benefits to businesses who make the transition. Core to the circular economy is the recognition that waste has value. It is a system in which that value is retained by keeping materials out of the waste stream through the promotion of reuse, repair, and refurbishment. For more details on the workshop (taking place Wednesday, July 13) and how you can help your business recover the value in your waste, click here.